Today I’m welcoming Kyle Robert Shultz, the writer of the Beaumont and Beasley series. I got to know him during my April Twitter game #aprilwipfolly where he posted really cool bits of his work-in-progress which has Cinderella and time travel. Now time travel and fairy tale rewrites are two of my favourite things, so I went to Amazon to get the first part on my Kindle. (You can do the same here) It was a really nice break away from reality while commuting, so I decided to ask Kyle if he would be so nice to stop by my blog and tell us something about his writing and himself.

Hello and welcome to Ink, maps and macarons. Thank you very much for visiting.

1. How did the idea of The Beast of Talesend come to your mind? Do you enjoy retellings of classical stories?

The basic premise of The Beast of Talesend‘s universe came to me about seven years ago when I was brainstorming various new spins on the fairytale fantasy genre. However, the story premise didn’t really “click” for me until early 2016, when the character concept for Nick Beasley popped into my head. The image of a skeptical investigator having to cope with a sudden transformation into a mythical creature really inspired me, given all the inherent potential for both drama and humor.

I’ve always loved retellings of every kind. Every time a classic story adaptation or even a comic book adaptation comes out, I like to delve into the finer details of how they drew from the source material. The process of reinterpreting old stories fascinates me.

2.Do you listen to music while writing? Do you have a playlist for The Beast of Talesend?

I have quite the eclectic mix of writing music, mostly movie and TV soundtracks but also some songs with lyrics as well. And I do have a playlist for The Beast of Talesend, which is available for everyone to hear on Spotify. Each track corresponds to a chapter of the book (including the epilogue). 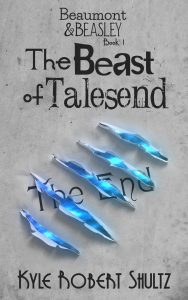 Nick is definitely my favorite. I love to get inside his head and envision his grumpy, sarcastic reactions to all the craziness in his life. My favorite fairy tale is Beauty and the Beast (though my favorite fairy tale adaptation is actually Tangled). I know people tend to vortex on perceived flaws in the Beauty and the Beast tale, but personally, I find the themes of redemption and hope in the story very inspiring.

4.When you develop characters do you already know who they are before you begin writing or do you let them develop as you go?

I mostly let them develop as I go. I’ve tried establishing character personalities in detail before starting to write, but it never seems to work out. They always break free of the molds I create.

5. What was the hardest and easiest part in writing your novel?

The hardest part was overcoming my own self-doubt and perfectionism to actually get the book finished. The easiest part was writing any scene in which Nick and Cordelia are bantering. Those were fun. 🙂

6. What can you tell us about your imaginary reader as you write? Do you write with a specific reader in mind?

Originally, I didn’t write with an imaginary reader in mind because I didn’t think anyone would want to read my stories. Now I have a sort of amalgam of my friends on Twitter in my head as I write. Somebody who enjoys imaginative fantasy but hates predictable, threadbare tropes.

7. Are there terms in your book that readers might be unfamiliar with? Can you explain some of these?

There are one or two that I’ve invented. The most crucial one I can think of right now is “Charmblood,” which simply means a person with magical ability. Other than that, I don’t think the vocabulary gets very wacky.

8. What would be your hero’s favorite real-world book? Your villain’s?

This may be cheating, but I believe Nick would select The Beast of Talesend as his favorite. He likes hearing himself talk. 😀 Lord Whitlock would probably pick The Hobbit, though he would consider Smaug to be the protagonist.

9. Do you have any advice for other authors on how to market their books? What’s your view on social media for marketing, and which of them have worked best for you?

I tend to favor genuine interpersonal connections for book promotion over automated advertising methods. I think this philosophy has more long-term effectiveness, even though it requires more time and effort than paying for an advertising service. As such, I’m very much in favor of using social media for marketing. Twitter has proven the most effective avenue for me thus far, though I’ve also had a lot of positive experiences with Goodreads.

10. Can you sum up your Work in Progress into ten words?

Private eye Nick Beasley lives in a world where fairy tales ended a long time ago – where zeppelins now soar the skies instead of dragons, and where the first automobiles have taken the place of flying carpets. He’s made a name for himself across the Afterlands by debunking fake magicians and exposing fraudulent monsters. This is the modern age, after all. Magic and monsters are long gone.

At least, that’s what Nick believes. Until he gets magically transformed into a monster, that is.

The only person who may be able to help Nick is Lady Cordelia Beaumont, one of the last enchantresses in the Afterlands. But in order for her to cure him, they’ll have to retrieve a powerful artifact from a ruthless crime lord – who is also Cordelia’s father.

The fate of the Afterlands lies in the hands of a runaway enchantress and a monstrous ex-detective. What could possibly go wrong? 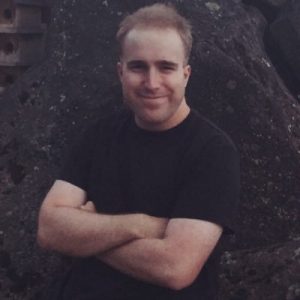 Kyle Robert Shultz began writing in his early teens after being bitten by a radioactive book. As a Christian, he strives to write fiction that is entertaining and wholesome, but devoid of overt “messages” or agendas. He lives in the wilds of southern Idaho, removed far enough from civilization to keep humanity safe should any of his rough drafts break through the electric fence. Aside from writing, his other passions are worship music, digital art, horseback riding, and raising miniature sheep.