Going to the Waterstones in Piccadily Circus is always the highlight of my day (even if it might not be such a happy moment for my bank account J) My usual hunting ground is the Children / Young Adult section. This time I was on the lookout for presents for a dear bookworm friend (and who are we kidding, for myself as well) when I suddenly saw Manuela’s book. I met Manuela in 2013 on an open day for the Children’s Literature MA of Roehampton, one of our teachers introduced us. She was doing her MA, I was an Erasmus student. We didn’t talk much but I found her a very kind and interesting person. We met again in 2015 on a talk by a picture book publisher.

Many people are drawn to Girl Detached because it had been banned in Italy and they want to know the reason why. I bought it right away because I felt very proud that I knew the author and because I firmly believe in supporting other writers. Since I have the luck of knowing Manuela in person, I thought I would use the opportunity to ask her some questions and she was so nice that she accepted to answer them.

Aleksandra has issues with her voice. Stress makes her stutter, and her life is one of stress. She can only speak clearly on stage, freed by the words of the character she plays. Then, when Aleksandra befriends her new neighbour Megan, and through her meets charming, handsome Ruben, it seems she has discovered a doorway into a different world, and a different Alek. But Ruben wants Aleksandra to play a particular role for him, and it is one that will come close to destroying her. 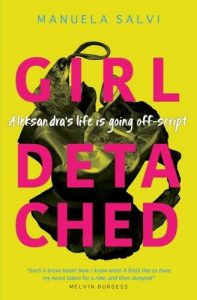 Is Girl Detached your first book published in the UK?

The original title of the book is Nemmeno un bacio prima di andare a letto. If I can still trust my high school Italian, it means something like “Not even a kiss before going to bed.” Why did you decide to change the English title?

Changing titles is common practice in publishing. Moreover, I’ve learnt that in the UK, the covers of books soon to be released can be tested on booksellers: choosing a title and a cover design is always a group decision in which the author’s opinion is of little relevance. The Italian title was too long for the British market and I had changed it to “A Girl of No Importance” (echoing Wilde’s Woman of No Importance, quoted in the book), but it wasn’t short enough! That’s why my publisher came up with “Girl Detached”

If somebody looks you up in Goodreads, they can find that you have quite a lot of (Italian) books under your name. Do you find the publishing world of the two countries very different? Was there something that surprised or shocked you?

We all work within a global market, but of course non-anglophone markets are strongly influenced by books translated from the English. I think the main difference is that in Italy, publishers constantly struggle to find the right balance between global pressure and local production. The problem is that marketing departments tend to allocate higher budgets to the promotion of American and British best sellers, whereas Italian authors are often relegated to the midlist.

Therefore I find UK publishing more open to challenging works, but the real surprise are the readers: young adults in the UK are mature, confident and sophisticated. They get their voices heard through blogs and Youtube channels, their reviews are accurate and professional, their opinion really counts. I think that’s the best part of being published in English. I’m afraid that gatekeepers in Italy are much more active and intrusive, and young readers generally too dependent on mass-market trends.

When I first heard about your novel, I sort of assumed that you wrote it in English. Then I realised it was originally written in Italian and was translated by Denise Muir who did a splendid job, by the way. I know that you write amazingly in English as well so has it occurred to you at all that you would do the translation yourself? Are you planning to write books in English in the future? Do you find it different writing in Italian and English?

Actually my English is not so amazing at all! I’m writing a novel in English now because it’s part of my PhD challenge and my career move, but I still need my faithful proofreader/copy editor Marinella Mezzanotte. Writing in a second language is inspiring and compelling but also time-consuming and sometimes distressing. It’s a wonderful opportunity packed with limits and obstacles.

I’m a bit hung up on this topic because I also write in two languages, Hungarian and English and I’m always intrigued by the workings of other bilingual writers. For me it’s usually quite simple, either a story comes to me in Hungarian or English. I sometimes do translations of my own works but I usually find the process a bit tedious.

It is tedious but sometimes I find it necessary, because in that way I’m forced to explore new linguistic paths and words. If I don’t, my vocabulary is at risk of being poor and repetitive.

What about the “fame” side of things? Have you been recognised on the street in Italy or in the UK? Were these experiences different? Do you have a favourite fan-related memory?

It’s really funny. I’ve spent so many years in my country hoping to be recognised somewhere by an enthusiastic reader or to get on a train and see someone reading one of my books, but I must admit it had never happened. Then, a month ago, a girl approached me after a talk at the Southbank Centre in London. I was in the audience but she recognised me and said: “I just wanted to say thank you for Girl Detached. It’s an amazing book.” I felt so cool!!! The best fan-related memory ever!

Girl Detached was banned in Italy. I’ve always been intrigued by banned books. As I see it, very often the reason for the ban is not that the book is “immoral” or “bad,” it’s sometimes just too honest. How did you get to know that your book was banned? How did it feel? How does this actually work, was it published than somebody read it, found it offensive and reported it?

It’s called “cultural censorship”, a covert form of banning used in democratic countries where censorship is not supposed to take place. It all started with my editor saying: “It’s a wonderful book but it won’t sell.” Then, after a couple of months, he called me to say that a few parents had complained about it in some bookshops around Italy. Then teachers refused to invite me to meet their students – one of them said (referring to what happens to the novel’s protagonist): “We see these things happen every day, but we don’t want to have the parents’ reactions to deal with.” The manager of a famous book festival told me that she had loved my book but she couldn’t invite me because it was too controversial and explicit; some members of the committee were part of a religious order, so they wouldn’t be happy. And so on. My novel slowly became invisible and eventually forgotten. At a conference at the last Bologna Children’s Bookfair, in March 2016, I was sharing my experience and the consequent publication in the UK when an editor from a large publishing house abruptly interrupted me and said: “What did you expect? You wrote a novel about underage prostitution and grooming of girls for sex, just when Berlusconi was on the news for his sex parties with underage girls!”, and they took my microphone. 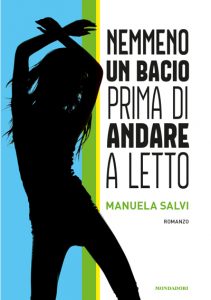 I felt slightly paranoid, talking about censorship in Italy. But a couple of years later, in 2015, the Mayor of Venice divulged his list of 49 banned picture books that were recalled from libraries and schools (and one of them was my “Princesses have no willy”…), so I realised that I wasn’t being paranoid at all.

Theatre has a very important role in your novel. Have you ever tried acting yourself? Is there a special reason why you chose an Oscar Wilde play? (Beside the fact that he is a genius. Obviously.)

I attended an acting class when I was 17, but the only role I have ever played is The Adult, in the comedy entitled My Real Life. Joking aside, I think Oscar Wilde’s work is perfect for exploring human relationships, and when I found his “A Woman of No Importance” I thought it would set off the novel’s theme beautifully.

The theme of the book is quite dark: teenage grooming, sexual exploitation, underage prostitution. How and why did you decide to tackle these issues? Was it difficult to do research?

The research was distressing but essential to understand all the dynamics of this phenomenon. I was a confident teenager, usually really wary when it came to boys, so I needed material to put myself in my protagonist’s shoes. My Italian editor proposed the topic and I was enthusiastic to have the chance to tackle it. I was especially intrigued by the power of seduction and how young girls use it.

Last but not least, tell us about your future plans. What are you working on at the moment?

Future plans, aka The Wish List: get an agent, finish the novel for my PhD in creative writing, start my next YA novel (I have 4 synopses ready). After the PhD  I’d like to teach creative writing around the world (top destinations at the moment: Sweden or Norway, Trinidad and Tobago, Ireland or Scotland, Hawaii, Orlando, New York). And be rich and famous. Or rich at least.

Well, that’s it. Thank you ever so much for answering all my nosy questions and I wish you a lot of success with your books to come! 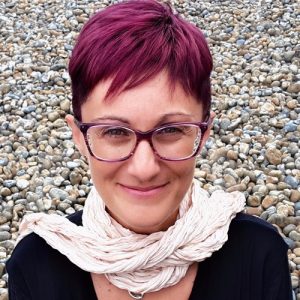 If you want to follow Manuela you can do it here:

The Goodreads page for Girl Detached:

You can buy the book on Amazon or from Waterstones.

My review of Girl Detached is coming soon too.