“One should never make one’s debut with a scandal. One should reserve that to give interest to one’s old age.”

The Petit Palais hosted an exhibition about one of the most well-known and most scandalous Victorian writers, Oscar Wilde. The exhibition ended on 15th January but I was lucky enough to be able to see it a few days before its closure. I put together this entry for those of you who couldn’t make it on time, or don’t live near Paris but are a fans of the dandy of dandies. 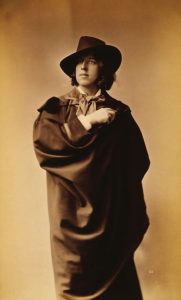 Wilde died in 1900 in Paris (his tomb can be seen in the cemetery of Pere Lachaise, covered in kisses) but his centenary wasn’t celebrated in the French capital in 2000, so the exhibition also tried to make up for it retrospectively.

“For this landmark event the Petit Palais will retrace the life and work of this ardent francophile and speaker of perfect French through more than 200 remarkable exhibits, some never shown before: manuscripts, photographs, drawings, caricatures and personal effects; as well as paintings borrowed not only from Ireland and England, but also from the United States, Canada and Italy, from French institutions including the Musée d’Orsay and the Bibliothèque Nationale de France, and from various private collections.” (From the description of the exhibition: http://www.petitpalais.paris.fr/en/expositions/oscar-wilde)

The exhibition explores different aspects of Wilde’s life. We see many instances of his relations with other famous artists of the age, for example, the celebrated actress Sarah Bernhardt, or James Whistler, American painter who lived in the same street as Wilde in London and became his good friend.

The beginning of the exhibition is dedicated to a number of paintings which were exhibited in the Grosvenor Gallery, London in 1877. Wilde published a review about the paintings, some lines of this review were featured alongside the pictures making the experience more immersive for the modern visitor. Wilde saw the painters, George F. Watts, William H. Hunt and Edward Burne-Jones as “the holders of the gate into the house of the beautiful”.

Wilde appreciated the mythological subject the most, so he must have appreciated William Blake Richmond’s Electra at the tomb of Agamemnon 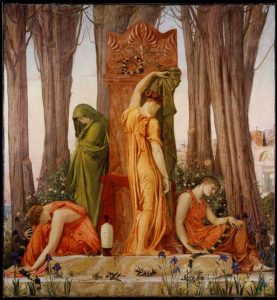 or Evelyin Pickerng’s Night and Sleep where the couple of Night and Sleep scatter poppies, the flower of dream and oblivion, across the land in a very Botticellian manner. 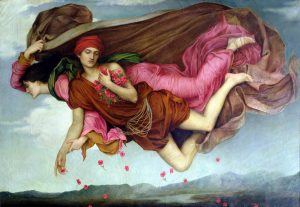 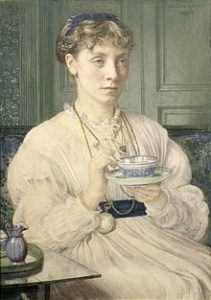 A version of Burne-Jones’s Days of Creation about which Wilde said: “In their [the angel’s] eyes there is the light of science and love.” Gustave Moreau had a framed photo of this picture, given to him by Burne-Jones himself. 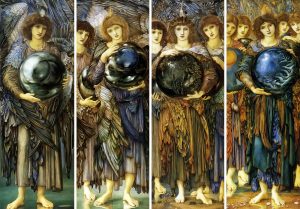 “The telling of beautiful untrue things is the proper aim of art.”

A whole room is dedicated to Wilde’s 1882 one-year long American lecture tour and how the Aesthetic movement was received in the States. Wilde’s lectures were mostly about beauty in general and the decorative arts and were inspired by the thoughts of Ruskin, Walter Pater and William Morris. The famous photographer, Napoelon Sarony took pictures of Wilde, which photos actually contributed to the perception of his artistic persona. This photos were so successful that some of them were copied and used for advertising purposes without the knowledge/consent of the model or the artist. 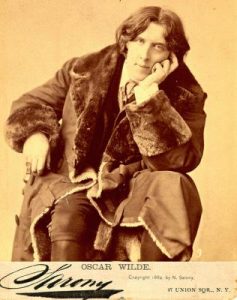 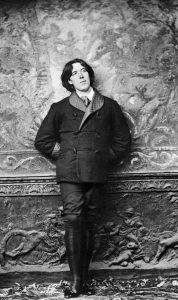 Wilde got enough money from his American tour to go to Paris. He enjoyed life in the “City of Lights,” he had himself invited to Victor Hugo’s house, made friends with Maurice Rollinat, poet Paul Bourget and Verlaine and he was featured in a Toulouse-Lautrec painting probably without his knowledge. 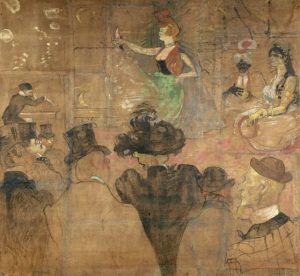 A thing I found of personal interest was that Oscar Wilde was a huge Keats fan and he was outraged when they wanted to auction his letters to Fanny Brown. (Hence the personal interest, being a Fanni myself I like poets who have muses who bear my name.) Wilde compared it to the disgrace when the soldiers sold Christ’s clothes after the crucifixion

A whole room was dedicated to Wilde’s controversial drama, Salome, which he wrote entirely in French and which was never shown in London in Wilde’s life time. On the floor a projection showed us Salome’s famous dance from different films while  on the wall we could see the unique illustrations of Aubrey Beardsley. 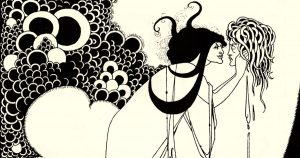 The last room dealt with the later years of Wilde’s life, his imprisonment and his release upon which he left the British Isles never to return again. André Gide, a friend of Wilde, quotest him in his 1910 essay, In memoriam : J’ai mis tout mon génie dans ma vie, je n’ai mis que mon talent dans mon oevre. That is “I put all my genius into my life; I put only my talent into my works.”

What I liked in the exhibition:

The catchy Oscar Wilde quotes on the walls

The Salome room and the film excerpts

One thought on “Oscar Wilde exhibition in the Petit Palais, Paris”