It all went suspiciously well.

I will have to wait a few days till the suspicion fades. When things went easily in London, I considered them a gift of the city, when things go easily in Paris… I learnt to suspect a trap. (Update: I paid for Thursday’s ease on Friday. I got on the train I even had a seat, I smiled to myself and started to read… just to be told at the next stop that everybody should bugger off the train and wait for the next one. My 25 min journey lasted an hour.)We will see, hope dies last.

I had to take half day off from work and in the other half I was duly falling apart. My blood sugar dropped twice so I was running around like crazy looking for some kind of sugar source. I unfortunately had to eat my secret biscuit stash in the morning so I needed to mine for the resources my office had to offer. Choclate-crisps&nibbles machine: broken. Coffee and hot drink machine: out of service. I had to stagger to the other kitchen, decode the workings of the machine there and then drink some extremely sugary cocoa. Then in the afternoon, my blood sugar decided to deep dive again. Now from experience I knew where to go, so I went to the kitchen further away just to find the machine dissected by maintenance. I deducted with my Sherlock skills that the presence of the maintenance man might mean that the other coffee machine was fixed and so it was. These were basically the biggest excitements of my working day. I started to make my way home, in the station I had a nice conversation with a man who was looking for Whichever station I don’t know where… I told him the only thing I knew: Paris was this way, far away suburbs were that way. 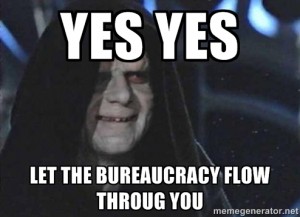 By this time of the day I’d grown a bit tense, I’d managed to develop a distrust and malaise with bank people which was a bit embarrassing since my own dear mother is one of them and it would be really sad if I had to hide under the blanket every time I saw her.

I definitely approve of off-peak Paris, it is around the amount of people with which I feel comfortable. Surprisingly enough, commuting went relatively sans-problèmes, there was a little something on the line A because of a suspicious bag … But really one gets used to the ongoing problems of the A as one gets used to the rain in England. Although the rain is less annoying and less frequent.

Anyhow, I met my boyfriend at the station and we arrived to bank in time, a bit early too even. At the reception we had to realise that we had forgotten the name of my bank counsellor. We got it sorted out and we even started the rendezvous a bit earlier than we were scheduled to. It took over an hour to open the bank account, but the lady was super nice (and she was dressed up very stylishly) she explained everything, twice if needed. She didn’t ask weird questions about my ID (like why is not the date of my arrival to France is printed on my ID…) and she even had a template of Hungarian IDs on her computer. I even made friends with a little girl who was wandering outside, munching on a bageutte (much the same way your humble narrator does when she lays her hand on this wonder of bakery.) I could deposit my cursed cheque on my account and I was told it should be active from that moment on and I should have my card and everything in ONE week. There you go, other bank from hell.

Then we paid a last visit to the most bureaucratic and discriminating bank of the Paris area, asked if we had to sign anything but we were told no no, it is all good. We asked for the place where we could make a written complaint, I am not sure if I want to though because if I never heard about this bank in my whole life it would be still too soon. Maybe next time when I’m in a particularly vicious mood… or when I feel like practicing writing French letters.

Theoretically, I should be able to use my salary by the middle of next week. Yuhu, the speed of things! In the meantime another month’s salary has arrived. I would like to conclude my little adventure with a movie trailer that eerily reminds me of local bureaucracy (at least what I have seen from it so far.)