Thank you very much for coming over to see us and having this little interview with me. Welcome to Ink, maps and Macarons! Your poetry pamphlet, you are mistaken has been recently published by The Rialto after you won The Rialto’s first Open Pamphlet Competition. Congratulations!

1.It is your first poetry pamphlet, but I know that you have been published in quite a few other venues as well. Could you give us a few examples, so that our readers can look you up? 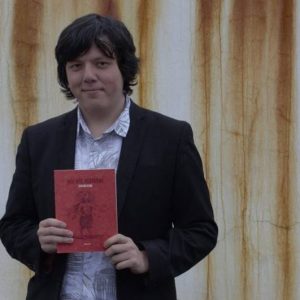 I have poems in the first two Fincham Press anthologies, The Trouble with Parallel Universes and Screams and Silences, as well as the more recent UEA Poetry Anthology 2016, amongst others. I’ve also contributed to magazines such as Lunar Poetry and The Suburban Review and online journals like Glasgow Review of Books.

2. Do you have a favourite poet who inspired you?

I have poets who inspire me in different ways. My obsession for line breaks comes         from reading Robert Creeley; my love for simple imagery from Lorine Niedecker. you   are mistaken came out of a time when I was heavily reading Sarah Howe, Mona Arshi         and Fred Wah. I also can’t pass up an opportunity to state how important attending live             readings, open-mics and other poetry performances have been in terms of making me want to explore new possible methods for delivering poetry through a page.

3. Have you always wanted to be a poet?

If I’m honest I think I have to say yes. By which I mean that growing up I always wanted to write, but I thought it would just be a hobby and then I could also do other things too; I wanted to be a footballer, a scientist, a film-maker, etc. But then when it came time for me to do things like join a local football team, or do my science homework, or collaborate on a film, I found that I didn’t have enough motivation so I would give up and go write instead. So I suppose it’s that love for writing which has been the one consistent desire in my life, and so therefore even if I haven’t always been conscious of it, I guess I have always wanted to be a poet in some way.

4. Do you have any peculiar writing habits?

I write best when I’m alone and when I’m in a coffee shop or library space, usually in the mornings and always on my laptop. I used to write poems by hand and then type them up but I gave that practice up. Typing uses all the fingers and therefore it feels more physical, more rhythmic. Now when I try to write poems by hand it just feels slow and wrong.

5. I know it’s a hard question, but which one is your favourite poem from the collection? why?

I can’t answer that! I have some favourite lines, for instance ‘things like untruthful art are poisonous / your laptop is filled with dead ancestors’ – also (and this will only make sense if you have the pamphlet so apologies to those who don’t!) pages 22/23 are aesthetically very pleasing to me. It’s a double page with ‘16 slices’ on one side and ‘yin/yang’ on the other and I was a little anxious about how they would both turn out but I really do think it looks great. The Rialto did such a fantastic job with the layout and the cover and everything like that – I can’t thank them enough.

6. Are you “only” a poet or do you write in other genres, as well? If yes, what are your favourites? We first met on a Children’s Literature writing course so I was also wondering if you have written something in that field… (because I would love to read it!)

That was so many years ago! I really enjoyed that course and while I don’t specifically aim to write children’s lit at the moment, that course really helped me to once again reinforce my belief in simple, everyday language and how it can be used to convey complex concepts. I remember ‘Love That Dog’ by Sharon Creech was on the reading list for that course and to this day I still believe that it’s one of the best books I have ever had the pleasure to read – and I don’t just mean in terms of children’s lit or children’s poetry either (which I must add is still criminally under-appreciated!) – so if anyone hasn’t read it then please do!

But back to the question! I write poems and performance pieces at the moment. But I also think that poems can be lots of things. I’m pretty against thinking about genres in terms of my own personal creativity, that way I always feel open to doing new things. I would love to write some things with a children audience in mind again. I’m sure I will.

7. Do you think it’s easier or more difficult to be a poet than, let’s say a hundred years ago?

It’s probably easier in terms of anyone being able to research anything over the internet and the accessibility of both writing tools and potential audiences. However, it’s probably just as difficult as a hundred years ago in terms of poets reaching beyond small audiences or gaining recognition outside of certain circles. The main difference between now and a hundred years ago is that while previously you needed somebody to champion you, to be the middle person between the poet and their audience, now it is possible to reach even more people and without the presence of that middle person. That doesn’t mean it’s easy, of course! And it also doesn’t mean that people should go out of their way to cut out that middle person, after all that that middle person could very well offer great insight, advice or edits. For my own personal practice I love having middle people to help me out! But the fact remains that it really is still possible for someone to upload a recording of themselves reading their poem in their bedroom and for it to gain millions of views, and that is exciting and fascinating and, potentially, harmful. I mean seriously, if I knew that a million people had seen some of the awful stuff I wrote in my bedroom growing up then I don’t know if I could keep on writing today!

8. You also do open mics. When you write a poem, do you have a definite idea if it should be performed or read in a book in silence? Or are they interchangeable?

I almost always have a definite idea of how I would perform or read one of my poems. My process then is to see how I can best transpose that idea of my own performance into an aesthetically pleasing or interesting experience to the page-reader. I have a youtube video called ‘earnings’ which is also a poem in you are mistaken, for instance,  and I tried to make both the performance and the page experiences different while still giving the audience the same effect. Hopefully I was successful! Please send me feedback everyone!

9. It’s your chance to recommend your book to the readers. Why should they read it, (Like what are the unique selling points?)

There is a poem called ‘stealing table sauces from wetherspoons’ and if you like that title then I really think you will like the rest of the pamphlet too.

10. The last question is not really a question, but an act of kindness, a shout out: if you have any contemporary poets out there who you would recommend to your readers, now is the time to mention them.

If I was to write a list of poets it would go on forever so instead here are some projects/organisations I think everyone should take a look at:

Thank you very much for your time and answers. I wish you happy writing and good luck with your pamphlet!

Thank you Fanni it has been a pleasure!

You can buy Sean’s pamphlet here