I decided to start collecting fleeting moments of Paris life and to enumerate my own personal myths and omens. This is the first attempt.

A few nights ago a rather peculiar phone exchange took place between two cities of our world.

“Allo? Mr. London is that you?” asked a sensuous but somewhat panicked female voice.

“Ah, Madame Paris, mon amie, what a delight!” answered Mr. London whose voice was uncannily like Tom Hiddleston’s. Now if I think of it, he looks like him too. What a coincidence! “How may I be at your service on this midnight hour?”

“It is about your young mistr… protégée, you sent to reside with me for a while. She drives me at the edge of tears! How could you handle her so well? She is such an ungrateful, ungraceful little thing! I gave her a warm abode, someone to tend her needs, I feed her , I even found her work in this difficult economical situation and what does she do? Cries! It’s just like when I had my baby in 1789, you could feed it, cradle it, give it the heads of the aristocrats… even the king! and it was never satisfied for a moment. London, understand you are the only one I can count on. Help me…”

“She is peculiar, isn’t she?” There was a smile hiding in his voice. “It is the sign of great minds that they’re  not satisfied with the bare necessities of life. I had a hard time first but then I found a key. Give her music.”

“Yes, that’s what I did on sleepy and tired and hectic mornings. I hid strings of music in the city and as she walked and found them, it was as though she had embarked on a treasure hunt for jewels. She was never sad on those days, although she cried. But the tears were different.”

“Merci, Monsieur London. I knew you would have pity on me. Sweet dreams.” 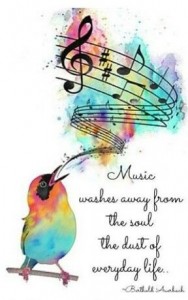 It’s a matter of attitude, I guess. I got terribly upset on Monday; the shock of reintegrating into the world of full time work, the mental breakdowns of the RER, finding out that the last three pages of a translation I had given birth to through sweat and blood disappeared, not to mention the war dance of hormones at this time of the month. The whip of my misery cracked on the back of the poor soul closest to my reach ( my boyfriend) and I buried the night in loud sobs and a flood of tears. He told me that I shouldn’t get this worked up about small things but at my current state the good advice was like oil on fire.

Advice for boys: Never tell a crying woman that her crying is an overreaction because she is NOT going to take it well.

I got through it however. Wednesday morning the RER A stopped in the middle of the tunnel because of “various incidents.” But I didn’t even raise an eyebrow. I was immersed in a book called Big Magic, Elizabeth Gilbert’s advice on creative living and it completely engaged my attention. I was standing on the ground floor of the train pressed against that metal-thingy in the middle and suddenly I heard music floating down from upstairs. First I thought it was somebody’s phone then that maybe Paris is so artsy that they have classical music radio on the train. For what I know actually, it could have been both or neither.

I tried to crane my neck or stand on tiptoes but I was still too small to unravel the mystery. My best bet would be that it was a sort of commuting musician, a modern day troubadour who embarked on making people’s morning commute less of a nightmare and all he asked in exchange was a few silver coins. But it might also have been a wandering, bodiless spirit, who had nothing left from earthly life but a few cheap melodies. I fancied this last image because in my infantile narcissism I could imagine that this great city has mobilised its supernatural residents to brighten my days.

The first song was the Second Waltz from Shostakovich, an evergreen classic which had made its way into my heart with the help of Andre Rieu. The invisible musician bought my affections already with this piece but then he (or she) started to play The winner takes it all and I found tears making dark spots on my white T-shirts. It brought to mind a fateful summer when my long time crush told me mercilessly that he was not at all interested in me. It is also one of the songs from Mamma Mia which always makes my mum cry. I had to get off the train before I could recognise the third song but I left with a smile on my lips and a delightful mystery on my mind which kept my thoughts too busy to stress about arriving to work in time.